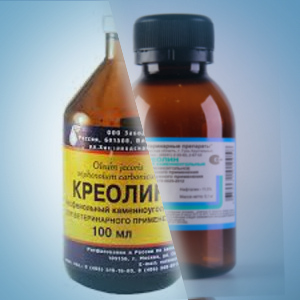 Currently, the usage of creolin in veterinary practice is assuming particular importance because of a set of circumstances, in particular, the conditions of constantly growing competition amidst well-known difficulties of legal structures reforms period experienced by Russian industry...

As well as inflation, nonpayments, and acute circulating assets sufficiency led to decline of the Russian outputs production and, in some cases, to actual termination of insectoacaricideagents production.

Moreover, importers set high production prices that led to significant decline their volume of procurements required for meeting practical veterinary medicine needs, and made such preparations not very available for the Russians, causing to refuse their purchases not only on farming or homesteading, but even in everyday life, in domestic animals caring, for example, dogs, cats caring, and others.

In regard to the above, Joint-stock company factory «Veterinary medicines» staff has taken number of steps to analyze toxic, insectoacaricide properties of creoln itself as well as complex creolin-related compounds deeply.

Historical background: for the first time, coal creolin was created by James as an antiseptic agent. Coal creolin was introduced into veterinary practice in 1975 by Pearson, and at the same time was explored regarding to "parasite resistance" by Frener.

Creolin contains intermediate coal oil, rosin, caustic soda, soap and ichthyol. We affirm, that use of coal oils as insecticides is also well-known for years. Already in 1892, grave coal oils emulsion was used for winter spraying of plants against aphids. In 1900, coal oils began to be used as insecticides in Germany, The Netherlands and Denmark. From 1921, coal oils-based preparations were used in England and a little later in the USA. Undertaken coal oils-based preparations studies in the coming years established that coal oils are the most efficient regarding to aphid and psylla eggs, and the less efficient regarding to butterflies, bugs and tick eggs. As a result of these works, coal oils-based insecticides production was organized in different countries.

In the early 1930-s creolin production by industrial processes from peat tar was organized in the town of Gus-Khrustalny, Vladimir Region. From 1942, due to urgent necessity of disinfectants for the needs of the front, creolin production in Gus-Khrustalny amounted to hundreds of tons. And till now, Joint-stock company factory «Veterinary medicines» in Gus-Khrustalny is the only creolin producer in Russia and in the near abroad countries, having maintained the technical capacity of output in the level of 15 thousand tons of creolin per year - it is a real result of 1989.

In the USSR formulation of high boiling coal oils-based insecticides was created in 1948 by Insectofungicides Scientific Research Institute. Obtained preparation got the name "KEAM" - Russian abbreviation from "Concentrated Anthracene Oil Emulsion" (концентрированнаяэмульсияантраценовогомасла). Presently, creolin obtaining is possible on the base of wood resins, peat, slate, coal oils and others.

Coal oils are one of the most important ingredients of creolins. On coal oils base, preparations easily formative emulsions with water are prepared. Creolin-typed preparation making related to the large quantity of emulsifying agents usage. Moreover, during the emulsification of wash and anthracene oil, difficulties in obtaining sufficiently stable preparations appear.

Modern technology of emulsification gives another solution of this difficulty. By mixing coal oils with aqueous solutions of emulsifications and following homogenization of these systems (by colloid mills or ultrasonic dispersants) concentrated emulsions, which can be diluted with water in different ratios, are obtained.

Currently, Joint-stock company factory «Veterinary medicines» is the only creolin producer in Russia. 2 types of creolin are produced: Bituminous coal creolin without phenol and Creolin-X. Production is attested, preparations are registered, manufacturing techniques are patented.

In recent years, significant toxicity and effectiveness analyses of creolin itself as well as its preparative forms were conducted. The analyses showed that half-lethal dose of creolinintragastrically amounts 480 mg/kg for white mice and 740 mg/kg for white rats. Half-lethal dose after skin application amounts 15520 mg/kg for the rats. Cutaneous-oral coefficient is equal to 20.97. Half-lethal dose for sheep after their bathing amounts to 9500 mg/kg or 9,5% in the percent concentration; maximum tolerated dose is equal to 5167 mg/kg. According to All-Union State Standard 12.1.007-76, the preparation belongs to hazard class 3. Creolindoesn't have allergenic, haematotoxic actions and is not an irritant to mucous membranes of the eyes. Creolindoesn't have teratogenic, embryotoxic and mutagenic action. Haematological and biochemical values (amount of hemoglobin, erythrocyte and leukocyte, total protein as well as alkaline phosphatase activity) of sheep, having bathed in 3% creolin emulsion, didn't fluctuate greatly and were statically inaccurate. In 30 minutes and 3 hours after treatment cholinesterase activity in experimental animals conclusively decreased in comparison with the control from 33.4% to 38.4% respectively. On the second day the activity reached the value near the reference value again.

Later, methodological guidelines on naphthalene concentration measurement (component contained in creolin without phenol) by high-performance liquid chromatography were developed for creolin standardization. These methodological guidelines were transferred to the Russian Federation Department of Sanitary and Epidemiological Surveillance of the Ministry of Health for consideration. It is established that naphthalene existence in organs and tissues of cattles and sheep, treated with 2% water emulsion of creolin, had not been detected in 24, 48 and 96 hours after the treatment.

As a result of transferred materials about creolin-X examination, recieved the following: the Russian Federation State Sanitary-Epidemiological Services made the sanitary and epidemiological inspection report №77.99.18.939.A.000 150.09.03 from 08.09.2003 by Federal Sanitary Veterinary Medicines Standardization center of Moscow Erisman Research and Scientific Centre of Hygiene with a positive opinion on the materials about coal creolin without phenol toxical and disinfecting properties analysis.

Creolinis used as a base of preparation (creocid) for the battle against the pasts of agricultural plants. Creocid underwent examination by State Chemistry Commission of Russian Federation Ministry of Agriculture and catalogued in list of pesticides used in crop farming. Creolin and complex creolin-related compounds are the objects of: 1 doctoral and 2 candidate dissertations. 2 doctoral degree-seeking students (1 in Kazakhstan and 1 in Ukraine) are preparing for their presentations. 1 kg of coal creolin without phenol costs 70 rubles, creolin-X costs 170 rubles. It is significantly lower than existing imported insectoacaricide price. Although creolin produces only in one company in Russia, forgeries with unknown origin and content appear in the market.

Usage of unknown content and quality creolin, undoubtedly, will lead to small efficiency of medical treatment or even occurrence of disease complication of animals during its application. Joint-stock company factory «Veterinary medicines» staff values the enterprise reputation and ensures a high quality of produced medicines and compounds.