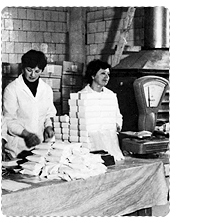 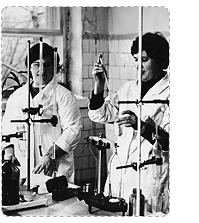 The necessity to found the creolin factory in the central part of Russia was an urgent need in disinfectants, because a number of different animal diseases have dramatically increased during the first years of war conditions. Most companies specialized in medicines and disinfectants production were located in German-occupied territory. So the Peoples' Commissariat for Agriculture of USSR challenged the managers a high priority: to provide the realizing of disinfectants within the shortest possible period of time and then offering them to the veterinary military service of Red Army and to country's animal breeding in general. 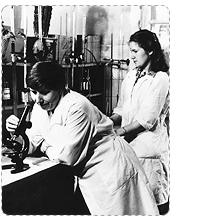 Already at the end of 1942 the factory had already tested and realized the first lots of disinsectalin and laundry soap to wash the horses that were the pulling force in the Red Army. In 1943 the factory began to realize creolin based on peat tar waste. Creolin is a disinficant, which was universal remedy used not only for the disinfection of premises and acarus scabies, but for the treatment of purulent and infected wounds that time. 500 tons of creolin had been produced by the end of the year. In 1946, over 4000 tons of creolin had been already produced. In the coming years the assortment of the creolins had been expanded - activated types of exclusively dipping preparation with 3% and 6% content of hexachlorane. It made the dipping preparation an important mean of dipping measures in sheep breeding. In the 1980-s the production of creolin reached the point of 20000 tons a year. 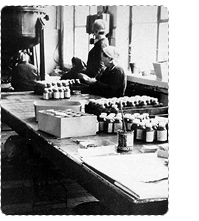